You Never Know What’s In Those Woods 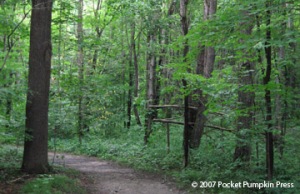 My cousin Billy was my classmate in Kindergarten. It must have been a relief to my mom; unlike the other Kindergarten moms she balanced a job with raising her family. And so it was arranged that Mom would drop me off each day and I would spend my mornings playing at Billy’s house. At noon or so, after a lunch of bologna sandwiches and milk, we waited by the mailbox and boarded the school bus together.

But when Billy stayed home sick one day, I headed toward the mailbox alone. My cousins lived on a dirt road, their house remote and surrounded by acres of thick Michigan woods. Leaves crunched underfoot on the late fall day, and I steered around low spots that always stayed a little muddy on the long driveway.

I had almost made it to the mailbox when I saw it. From the left, a massasauga rattler slithered out of the thick weeds. I froze in place as it crossed in front of me, not three feet from my brown oxfords. Even at age five, I knew it was a rattlesnake by the distinctive shakers on its tail and I knew that a rattler was fierce. In that moment, I weighed my options: Turn, and run back toward the house, or stay put until the rattler reached its destination on the north side of the driveway. If I ran to the house, the snake would be long gone by the time Billy’s mom got out here to look, and what could she do anyway? On top of that she had a new baby to tend and I’d likely miss the bus, causing all sorts of complications. The only other choice was to hold my breath until danger passed, then continue toward the mailbox. Then, I reasoned, I could get on the bus and move on with the day as if nothing had happened.

Which is exactly what I did. I took my assigned seat on the bus, hung my quilted winter jacket in the Kindergarten coat room, and never mentioned the rattlesnake at all.