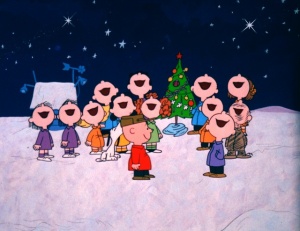 The kids were toddlers, and money was tight. The TV ad promised hours of holiday fun with the “Disney Christmas” LP; I must have seen the ad a dozen times before I dared to give it much thought. With shipping, that album was going to come in at about $17. I had to think twice about spending that much, and Christmas was still months away. Finally, on a September afternoon, I picked up the phone and dialed the 800 number.

The package arrived just before Halloween.

“Disney Christmas” got us started, with 30 songs sung in familiar cartoon character voices. For back-up, I had Bing Crosby and The Ray Conniff Singers.

And so we listened and we sang. Jingle Bells. Up On The Housetop. Away In A Manger. From the time that my children could speak, they learned to sing the songs of Christmas.

“Christmas music only” became a post-Halloween tradition in our house. I never really told anyone, never announced it at the dinner table, never made it a decree. But my collection of Christmas music expanded to include medieval chants, Percy Faith instrumentals, and Fat Bob The Singing Plumber. On November 1, those albums took a place of honor next to the turntable and the rest of our music collection was tucked away until January. Eric Clapton, Carly Simon, and The Who took a break, so to speak.

The collection of LPs gave way to cassettes, then to CDs. Hallmark rolled out a collection of Christmas music, and Julie Andrews and Harry Belafonte joined our lineup. I pushed the “play” button as soon as we got home every afternoon; somehow, Christmas songs weren’t a distraction as the kids grew and we tackled homework after dinner. We sang in the car on the way to the grocery store, the mall, or a doctor’s appointment. We knew all Twelve Days of Christmas and never ever confused the pipers piping with the lords a leaping.

My children did, indeed, learn all the words. Granted, it’s probably not the most important lesson they learned by virtue of being mine. But I believe to this day that they could pull up the second verse of “Silent Night” or the chorus of “Do You Hear What I Hear” almost instinctively.

There’s a certain satisfaction in that, and more than a little sentimentality too.