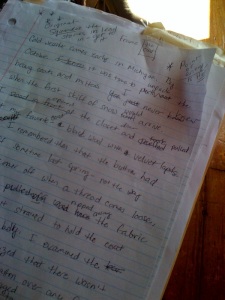 This summer, I immersed myself in a community of writers at a place called Star Island.

I learned a lot during those seven days. I learned to figure out what’s at stake. To recognize words that say nothing. To write lean.  To move my readers  forward with every sentence.  That writing is a lot like diving into the Atlantic Ocean at 6:30 a.m.

I made lifetime friends, and studied with a writer who has mentored me for thirty years – even though we had never met in person until I saw her walking toward the dock.

I’d like to share an assignment we were asked to do in preparation for our week on Star Island. It’s called “Great First Lines.”

Below are a few first lines from my most beloved books. Maybe you’ll nod in agreement, and recognize one of your own. Maybe you’ll be curious and add a book to your reading list. Maybe you’ll learn a bit more about me through the words of writers whose thoughts shaped me.

The house where I grew up, in Durham, New Hampshire, is the only one on the street with a fence surrounding it. That fit. – Joyce Maynard, At Home in the World

My father and mother should have stayed in New York where they met and married and where I was born.  – Frank McCourt, Angela’s Ashes

He told them he loved them. Each and every one of them. – Frank Cullen, Columbine

Our car boiled over again just after my mother and I crossed the Continental Divide. – Tobias Wolff, This Boy’s Life

The Santa Anas blew in hot from the desert, shriveling the last of the spring grass into whiskers of pale straw. – Janet Fitch, White Oleander

I was on fire. – Jeanette Walls, The Glass Castle

And two that are not first lines, but great lines nonetheless:

On our first real date, we had drinks at his house, talking nonstop until dawn – and I stayed for forty years. – Diane Ackerman, One Hundred Names for Love  (the book I am reading right now)

“My dear fellow, who will let you?”  “That’s not the point. The point is, who will stop me?” – Ayn Rand, The Fountainhead  (a book I have read at least once a decade since age 18)