In Defense of Long Division 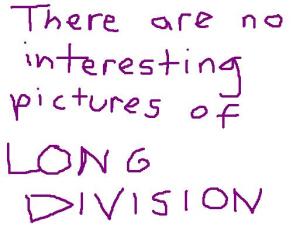 It is hard to say that anything is certain in life, but I’m quite sure a few things can be crossed off my shopping list for good.

A watch you have to wind every day. Or ever.

This morning I talked with some friends about obsolescence. Even the 20-something in the group was able to remember items from her childhood that have gone the way of answering machines and slide rules. (Although she wasn’t exactly sure what a slide rule was.)

Before long, we realized our list might extend beyond everyday objects. We wondered whether certain skills or topics we learned in school might go on the list. What had we learned that is no longer relevant, or even accurate?

It was easy at first. I learned about nine planets in our solar system. That’s certainly not true anymore, since Pluto’s demotion to a mere dwarf planet.

Today’s Periodic Table of the Elements has 118 neatly organized squares. Back in the 70s, I learned only 103 or so.

In typing class, Mrs. Smith taught us to hit the space bar twice after each sentence.  No more, according to the Chicago Manual of Style. Computers give us proportional fonts, and a single space will do just fine.

Today, most high school students cannot form the entire alphabet in cursive. They only need the letters used to sign their own names. The demise of cursive writing is not a big deal; these kids have been required to use word processing for their assignments since third grade.

And thanks to graphing calculators, trig classes can delve into sines, cosines, and tangents without plotting tedious points by hand on quadrille paper.

Which brings us to long division.

With a basic calculator running three bucks or so, and every child over age eight carrying a smart phone, does anybody need to crank out problems like 25,476 divided by 181 the old fashioned way? Does the “upside down L” division sign mean anything nowadays? We are much more familiar with the simple forward slash on our phone or computer screen. And when was the last time you used (or even thought about) the words “quotient” or “remainder”?

In this morning’s conversation, opinions were mixed.

The truth is, even top flight physics students of the 21st century have little notion of the mechanics of long division. They don’t have the time or patience for the trial and error methods that I learned, and probably don’t have to show their work the way I did. Division is simply a step on the path to solving a larger problem.

But despite the long-standing controversy over the “new math” of the last generation, or integration of math skills into “spiraled” curriculum today, I believe there is  something to be said for plain old long division.

Division is a foundation skill, much like writing a basic sentence. The neat pattern of mathematics isn’t complete without an understanding that division is the opposite of multiplication – sort of a repeated subtraction process. As we learned to handle more complex problems, we applied estimation skills. Those remainders we learned about early in the game propelled us to an understanding of decimals and fractions, and how they relate to each other.

And the orderly language of mathematics is, indeed, one representation of the world around us. It’s what those kids are learning in physics class. It is important, I think, to frame those scientific concepts around deep understanding of the basics that underlie them, and help students understand “why.”

There is more to it than hitting the slash key.

My husband Mike takes a different stance. He is convinced that the full bore electronic route to solving time consuming math problems will win out in the end, if it hasn’t already. He went so far as to say that if you handed a traditional long division problem to a passerby  on the street (with that “little tent thing” over the numbers), you would be met with a blank stare, or the remark, “What the hell is this?”

Maybe I am a traditionalist. Maybe it’s idealism. Maybe a bit of naiveté  But some things, I believe, should never go out of style.

9 Responses to In Defense of Long Division