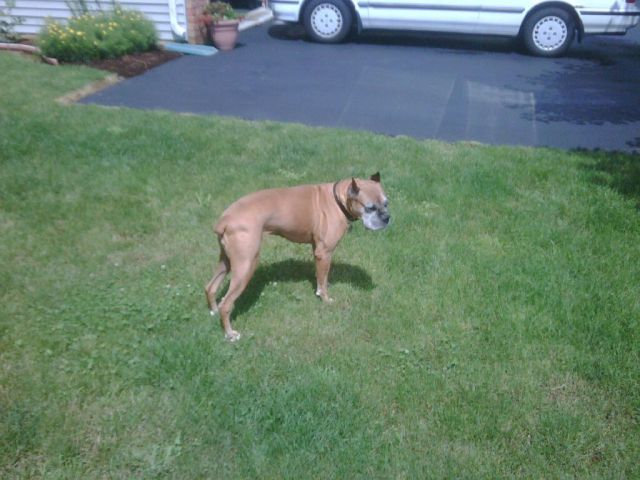 I woke up early today, and pulled on my black yoga pants and a plain t shirt. I barely combed my hair. No need to look in the mirror; It was not a morning for makeup. I’d shower after a while.

I watched Holly stagger out the back door.  She didn’t go far, but her legs looked a little steadier today. She returned to the house and walked past her food bowl without a glance; she quit eating on Wednesday.

I glanced at the clock. It was time to go. I clipped the blue leash onto her collar, and hesitated. I bent down and wrapped my arms around her broad neck, nuzzling the top of her head. “Good girl, “ I whispered, as if she could hear me. “Let’s go, Doodlebug.”

We stepped out into the cloudy Florida morning. The air was warmer than it looked from inside.

When we got to the car in the driveway, Holly didn’t hesitate. She’s always been a good traveller. I lifted her tenderly, and placed her hind legs up on the seat.

From behind the wheel, I rolled the rear window down all the way. She might as well have her head out the window this morning. But she laid on the seat, head down. I knew then that she had surrendered.

The Golden Gate Animal Clinic sits in a low 1950’s style building, a block off the main road. You wouldn’t know it was there, unless you went looking for it. It’s not in a fancy part of town. But a friend told me that Dr. Lanier was a kind and gentle man. And he had a great way with Holly. He saw her four times last week.

Walking toward the door, I almost detected a little bounce in Holly’s step. Hope flickered for a moment. Maybe she felt  a remnant of her normal curiosity about this trip. Maybe she felt happy to be out on a journey. She sniffed the grass off to the right, like always.

Just before the door into the office, the concrete sidewalk ends. Emerald green indoor/outdoor carpeting covers the entry step. Holly’s back legs gave out before we reached the edge of the carpet. I reached under her belly to catch her before she fell, and held the door open with one foot so I could help her in. I was glad that in Florida, entry doors open outward.

The receptionist had the papers waiting. I checked the boxes and signed my name. She ushered us to the exam room.

He would give her a tranquilizer, he explained. It would relax her. It was time. She had gone downhill. He gave her the injection in her shoulder; she didn’t flinch.

I bent forward and laid my hand on her side. I watched her belly rise slowly, slowly with each breath. I wanted her to feel my touch. I wanted her to know she was not alone. She couldn’t stand to be alone. It was her greatest fear. I heard the snuffly, snoring noise that a boxer makes when it breathes. I realized that her coat was almost completely silver grey.

The doctor came back with his assistant. He held a brown leather muzzle. Because the tumor was in her brain, he said, it can cause behavior that we wouldn’t expect. He would muzzle her while he started the tiny IV line in her front leg.  Just in case. The technician held Holly’s head. I kept my hand on her side. The doctor knelt and swabbed her leg with alcohol. We formed a kind of trinity, kneeling around this innocent dog who always fancied herself the center of attention.

She didn’t move as the medication flowed up the plastic line and into her tired body. Her chest went still. My hand lingered on her short fawn coat, still feeling her warmth. The room was silent until Dr. Lanier whispered, “She’s already gone.”

Photo: Holly at her Pennsylvania home, after an exciting trip to the mailbox. 2011.